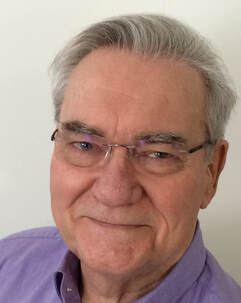 ​CHRISTOPHER WEAIT is a composer, author and pedagogue. Now retired from performing and teaching, he is Professor Emeritus of bassoon at The Ohio State University where he taught for twenty-two years. He was twice honored by students at Ohio State's School of Music: "Distinguished Teacher of the Year" and nominated Sigma Alpha Iota's "National Arts Associate." After retiring from Ohio State he was Adjunct Instructor of Bassoon at the Capital University Conservatory of Music in Columbus, Ohio. He is an Honorary Member of The International Double Reed Society conferred “in recognition of his significant contributions to the world of double reeds.”

​Before joining the faculty at Ohio State, Weait was appointed one of the co-principal bassoonists of the Toronto Symphony by Maestro Seiji Ozawa. He served in that position for seventeen years under music directors Ozawa, Karel Ancerl and Sir Andrew Davis. Prior to that he performed in the Chamber Symphony of Philadelphia and the United States Military Academy Band at West Point. He has been a guest bassoonist in the Cleveland Orchestra, the Grant Park Symphony, the Montréal Symphony and the National Arts Centre Orchestra and was acting principal bassoonist of Ohio's Columbus Symphony Orchestra during the 1993/1994 season.

​He appeared as soloist on tour with the Toronto Symphony, the Chamber Symphony of Philadelphia and with Keith Brion and his New Sousa Band. His solo repertoire included hundreds of works and dozens of commissions and premieres.
​
His solo albums are: "Bassoon with a View. Late 20th Century Bassoon Music" on Innova Recordings (Innova 520) and "Telemann for Bassoon" (Weait Music 9520). He also has chamber and solo recordings on the Crystal, Lyrichord, CBC, and Kneptune labels. As founder and director of the Toronto Chamber Winds he supervised notable recordings of the Mozart wind serenades for the Canadian Broadcasting Corporation and Crystal Records.

His wife, 'cellist Margaret Barstow, produced their recordings and performed with him in duet on numberless school concerts, and on tour in Europe with the Canzona Trio. She was a member of the ProMusica Chamber Orchestra of Columbus for 17 years and is the creator of an array of bassoon accessories.

Weait's teaching includes more than six decades as a private teacher, two years as a high school band director and ten years as woodwind section coach of the Toronto Symphony Youth Orchestra. He has been a visiting professor at the Eastman School of Music and twice at the Jacobs School of Music at Indiana University. He has been a guest teacher at the Festival at Sandpoint, the National Youth Orchestra of Canada, the Festival Internacional de Música de Buenos Aires, the Chilean National Youth Orchestra and has been a four-time guest artist at the annual Glickman Popkin Bassoon Camp in Little Switzerland, North Carolina.
Between 1988 and 1999 he was Music Director and Conductor of the Central Ohio Symphony Orchestra and is now their Conductor Laureate. He has conducted in Germany, Canada and the United States and at the annual meetings of the International Double Reed Society.

Weait began arranging and transcribing instrumental music in high school. His theoretical and composition studies were with Aaron Bodenhorn, Arthur Frackenpohl, Edward Young and Donald Hunsberger. He has more than 600 creative works including compositions, editions, arrangements, transcriptions, books, recordings and videos. More than 240 of his works are available at TrevCo-Varner Music.

​His music has been performed by the Eastman Wind Ensemble, the Toronto Symphony, the Hong Kong Wind Kamerata, the McConnell Arts Center Chamber Orchestra, the U.S. Navy Band, the West Point Band, the Ringgold Band and by very many chamber ensembles. His compositions have been recorded by the German Wind Soloists (Marco Polo), by the Chinese bassoon virtuoso Liu Qi (China Record Corp.) and by Canada’s Aeolian Winds (IBS) and York Winds (ERA). US recordings include: the New York Bassoon Quartet (Leonarda), Arbitrio (Centuar), and OBOHIO (Coronet).

In addition to his ground breaking report on vibrato, published in 1977, he is the author of important teaching resources including: "Bassoon Strategies for the Next Level" and "Bassoon Reed Making: an Illustrated Basic Method" that quickly became standard texts in the field. Both are published by Weait Music. His "Bassoon Warmups Second Edition (2010)" is published by Emerson Editions in the United Kingdom and is in use all over the world.
Proudly powered by Weebly